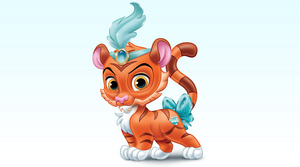 Sultan is a brave Bengal tiger cub who belongs to Jasmine. He is voiced by Bryce Papenbrook

Jasmine met Sultan while shopping in the Agrabah market one day. When the princess reached out for a piece of silk, she touched a striped tail instead! At first, the sleepy tiger wasn't very happy about being woken up from his nap. But as soon as Jasmine gave him a big hug he knew he'd found a best friend. Jasmine even named him after her father, Sultan.

Sultan is a burnt-orange tiger cub with light brown stripes all over his body, a few thick stripes on his tail, a single one on his forehead, and entirely brown ears. His inner-ear and nose are pink, while his chin, chest, and paw tips are white. He has loose, pale brown fur on his cheeks. His eyes are amber. He wears a blue band on the top of his head with a turquoise gem at the center attached to a single, big blue feather. On his tail is a simple turquoise bow.

Sultan is known for his loyalty and bravery. He's also very selfless, and is willing to do anything to protect the ones he loves. He's one of, if not the bravest of all the palace pets. Often he spends his time picking out jewels with Jasmine. He loves to take rides on the flying carpet and eating meats.