Palace Pets Wiki
Register
Don't have an account?
Sign In
Advertisement
in: A to Z index, Dogs, Princess Cinderella,
and 22 more 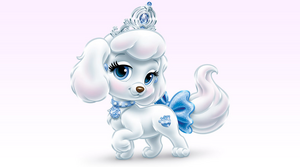 Pumpkin is a glamorous puppy who belongs to Cinderella. She is voiced by Tara Platt.

Pumpkin is a little white poodle dog with pearl-blue eyes and a brown nose. Her hair consists of puffed bangs, and a puffy tail with a slight curl on the end. Her ears are also puffed. She wears a fancy silver tiara that resembles Cinderella's carriage with blue gems decorating it, blue earrings, a blue collar with pearl studs and a big blue and silver piece, and a big blue shimmering ribbon on her tail.

Pumpkin was an anniversary present to Cinderella from Prince Charming.