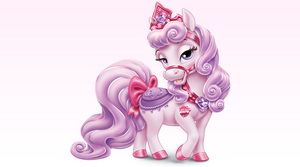 Bloom is the most charming pony and belongs to Aurora. She met Aurora when Prince Phillip gave her the pony as a gift and named her Bloom.

She is voiced by Christine Cabanos.

Talented and full of charm, Bloom is the most popular pony in all of the stable. She is a natural performer and loves attention.

A pale lilac pony with feminine, purple eyes. Her inner-ear is pale pink, while her hooves are dark pink. Her raspberry-colored paw marking is on her right shoulder. Her curly hair is slightly darker than her skin and curls into several separate sections to match her short curled bangs. Her long flowing tail is very curly and puffed. Bloom wears a raspberry crown and collar, both adorned with an amethyst gem heart. Her glittering tail ribbon and harness are also raspberry. On her back is a short purple saddle with small gem dangles.